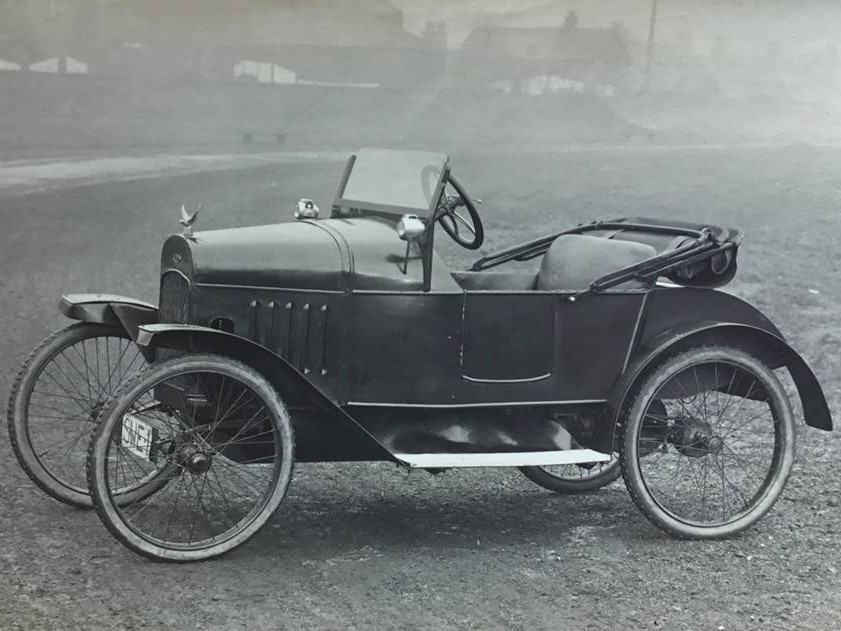 When a devastating fire ripped through Burnside Motor Works in Dalbeattie on 23rd December 1921 it turned a young car designer's cherished dream into a financial nightmare in the space of just a few hours.

James Baird Skeoch, an innovative inventor who patented some of his engineering designs targeted the budget end of the emerging motor car market with his pioneering design for a “reliable and economical small car” using lighter and cheaper motor cycle parts.

Estimates vary over just how many of the tiny two-seaters were produced during the ensuing months prior to the catastrophic blaze, which left James Skeoch's short-lived business venture in ruins. Financed by family loans and uninsured for fire, the disaster must have had a devastating effect on Skeoch who was forced to abandon his plans and returned to work for one of his previous employers. Whatever the output from the Millisle workshop – anything from six to 12 cars were produced– one thing is now clear: there are no known examples of Dalbeattie's all-too-brief motor manufacturing industry still in existence anywhere in the world.

But as of Spring 2018 all that is to set to change as Dalbeattie Men's Shed has accepted the fairly daunting challenge of finally realising the Skeoch family's revived notion of building a replica car in the town where it all began almost a century ago and where it dramatically ended so soon after.

The guiding principle at the heart of the project is to be true to James Skeoch's design using, as far as possible, authentic parts from the 1920's era. Only when it is absolutely unavoidable will new parts be sourced or made.

James Skeoch was born at Bellshill, Lanarkshire, in 1889 and after leaving school went to work in the drawing office of an engineering company which was later to diversify into the manufacture of steam lorries. Switching jobs several times, he eventually arrived at the Beardmore Aero Engine Factory at Heathhall, Dumfries, operated by Arrol-Johnston. Possessed with an inventive mind, he began developing his ideas for a low-cost car using motor cycle parts.

According to his grand-daughter Fiona Sinclair, who was become pivotal in the re-emergence of the Skeoch family dream in 2017, her grand-father had been made redundant in 1919 and by chance came across premises in Dalbeattie which he rented and operated as a motor repair shop, acting as agents for Petter and Wolseley engines. He would then go on to build a prototype of the tiny Skeoch Utility Car with an air-cooled engine hidden behind a dummy radiator, gearbox, pedal and hand-operated rear brakes, and wire wheels shod with Dunlop tyres. The coachwork was built and painted bright red by Sim and Wilson Ltd of Cathcart, Glasgow.

The basic selling price was £165 – around £7000 at today's prices – but for another £15 (£650) proud new owners could acquire optional accessories including a hood, a horn and a mascot in the shape of a bird. The prototype was completed in 1920 and exhibited on Stand 167 at the Scottish Motor Exhibition in the Kelvin Hall, Glasgow in January 1921. Contemporary reports said it had sold within 10 minutes of the exhibition opening.

James was confident of future success and Fiona Sinclair revealed the venture was financed by funds borrowed from three spinster aunts of her grandmother.

Photographs taken in the workshop showed six cars lined up on the “production line” and it is not known with any confidence just how many were completed before the fire which spread through from an adjoining hosiery factory to the motor works. Everything was destroyed including two cars in production.

The business was not insured against fire and, despite the offer of finance from another source, it never resumed production, and Skeoch returned to work for one of his previous employers. And so Dalbeattie's contribution to the national motoring revolution ended barely a year after it had begun with such ambitious hopes.

That's how it remained for many years until the founder's son, Ronald Anderson Skeoch, an aviation engineer, began thinking about resurrecting the Skeoch dream and had talks with a number of people he thought might be interested in helping to carry it through.

He began gathering together a number of genuine parts for a proposed project and contacted Martin Shelley, a cycle car enthusiast, for help and advice in bringing his idea to fruition. James acquired an original Beardmore Precision engine, a Burman gearbox (possibly from New Zealand), replica wheels (from the USA) and a steering column.

Sadly, Ron Skeoch died in 2017, before any real progress had been made in assembling a new car. It was when James's grand-daughter Fiona Sinclair and her elderly parents Archie and Betty (James's daughter) were clearing Ron Skeoch's house and garage that they came across the car parts. Not only that, they found the original linen drawings for the car in the attic, original photographs in a trunk and several radiator badges. Reams of unused company headed notepaper and order forms were also recovered. With a background in conservation architecture and an interest in various historic fields, Fiona Sinclair was keen to see her late Uncle Ron’s dream realised. She was also enthusiastic that the Dalbeattie link be preserved and hoped that a recreated Skeoch might be displayed in Dalbeattie Museum.

Martin Shelley was approached again about resurrecting the project and while he felt unable to take it on personally, he wondered whether a local secondary school might be willing to undertake the construction. However, nothing more happened until Martin happened to see a video feature on BBC Scotland about Dalbeattie being awarded the 2017 UK Men's Shed of the Year Award. He thought to himself this might be something they could do and he made contact through the shed's website.

Dalbeattie Men’s Shed Trustees were keen to accept the challenge and got the backing in principle from the rest of the membership, subject to clarification and assurances on some very important points. These concerned, for instance, how the project was to be financed, who would have ownership of the vehicle, and as it had become clear that Dalbeattie Museum did not have adequate space available, where it would be kept or displayed.

At the meeting it was agreed that Dalbeattie Men’s Shed would raise the necessary funds to build a replica Skeoch car, and retain ownership. Consequent upon this another room would be made available to the shed by Alan Mazza specifically for the construction of the car, and Fiona Sinclair would provide a legal title to the Skeoch car parts which were handed over, along with copies of the original drawings.

Fiona also agreed to donate parts of a 1928 Riley 9, which belonged to her father, for the purposes of raising funds towards the cost of the project. (By coincidence, another car destroyed in the fire was a Riley, left by a customer for repair).

Although no pressure was placed on the Shed to complete the car within a stipulated timescale, it would be a fitting culmination to the project if the vehicle was finished in time for the 2021 Scottish Motor Show – exactly 100 years after the Skeoch made its exhibition debut, and Fiona and her parents get their wish to sit in a replica of the car which played such an important role in their family history.